IoT is Putting Your Network at Risk 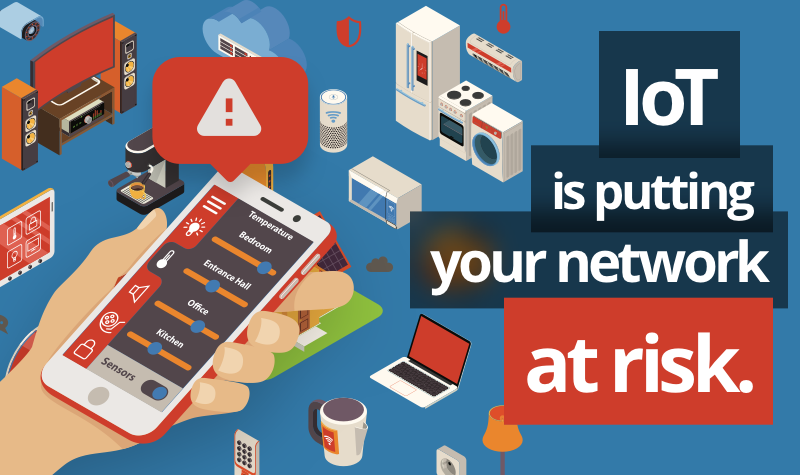 It’s no secret that modern life is increasingly dominated by, and organized around, technology where pretty much everything is connected to the net. We increasingly depend on — and love — next-gen gadgets whose functionality depends on an internet connection. While the possibilities of such inventions are endless, they also pose challenges.

The Internet of Things (aka IoT) is the fast-growing network of objects that are connected to the internet and are able to collect and exchange data using embedded sensors. The concept has attracted the biggest names in tech, from Apple to Samsung and everyone in between.

We’re talking everything from smart home IoTs (like voice-controlled thermostats); to wearables (the Apple Watch and others that enable everything from text messaging); Fitbit and Jawbone (that have revolutionized fitness); IoTs that could transform entire cities by solving real problems (traffic congestion, crime, pollution, noise reduction, etc.); to vehicles equipped with internet access that can be shared with others. Tech experts predict that everything from light bulbs to toasters will soon have internet functionalities!

As we all know, internet security is a growing concern with the net being constantly hacked and cybercrime on the up-and-up. That means, because the very gadgets emerging rapidly are internet-dependent, they too are at risk of being hacked. The more technological and internet-connected we become, the more security problems we face. The truth is that most of the public is still unaware of this and of the fact that cybercriminals can not only take control of connected cars, for example, but are using everyday appliances to launch distributed denial of service (DDoS) attacks with disastrous consequences.

The auto industry, for example, was quick to adopt the possibilities of IoTs, launching models with internet-enabled infotainment systems and hubs, and automated features such as traffic jam assist, adaptive cruise control, and automatic parking. This should mean less accidents, pollution, congestions and more productivity. However, last year, the FBI, US Department of Transportation, and National Highway Traffic and Safety Administration teamed up to increase security awareness and warn people about cyber security threats to these cars. They even had two hackers compromise the security of a car remotely taking over the steering wheel and applying the brakes. In reality this could threaten lives. These vehicles need adequate and advanced technology behind them to avoid breaches and to ensure security and safety.

IoT-embracing cars are not the only targets. Cyber criminals are trying to exploit connected gadgets like webcams, Wi-Fi routers, wearables, and smart thermostats to launch wide-scale attacks on companies and organizations — as they would hack into computer systems. Hackers use Mirai malware (which ironically comprises hundreds of thousands of CCTV cameras, DVRs and SOHO routers unwittingly built by the very IoT manufacturers), to turn systems into botnets to inaugurate network compromises — they could even take out a city’s smart connected lights. In fact, in September 2016, hackers used 152,000 consumer IoT devices to initiate a DDoS attack on OVH (French cloud computing company that offers VPS, dedicated servers and other web services). The hackers flooded the company with an incredible 1Tbps (a speed of one Terabit per second) of traffic, causing chaos for its global customer base.

As with vulnerable computers or mobile phones, no IoT device is safe and most consumer-ready hardware is pretty easy to hack — especially home security systems, smart TVs, and baby cameras. Yet, consumers remain unaware and keep flocking to buy the latest connected gadgets.

What makes them so vulnerable is that these devices come with unchanged default device passwords (and passwords are extremely easy to hack), have infrequent updates, and poor security protocols. While consumers can do their part to up their devices’ security (change default device credentials, modifying privacy settings, disable unused services, ensure firmware is up to date), organizations and manufactures need to develop safeguards to stop hackers whilst the IoT is still in its embryonic stages and before it burgeons bringing with it more complex and widespread security threats.

IoT is Putting Your Network at Risk