Technostress: How Technology Affects Us 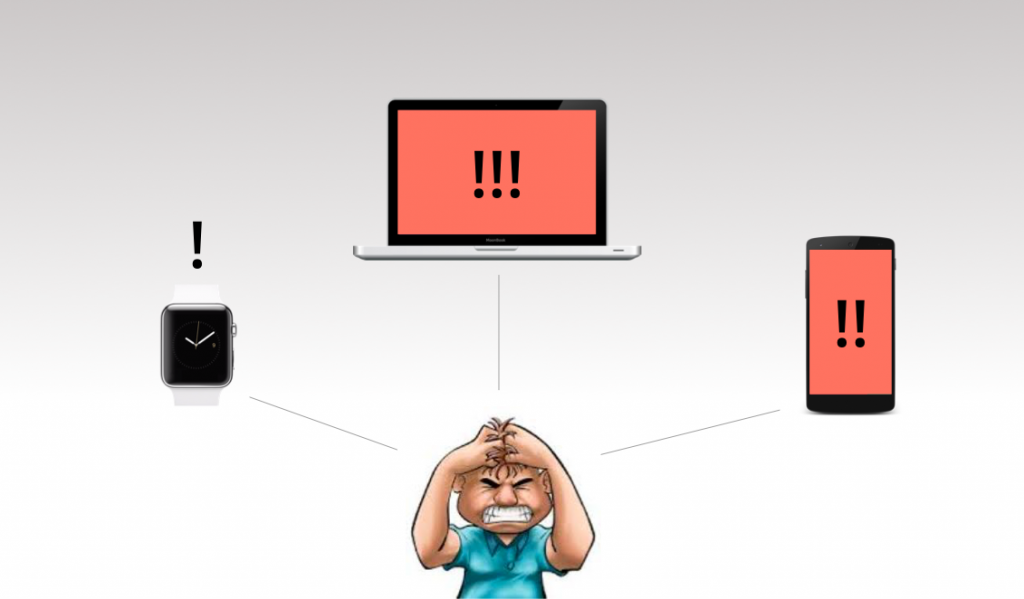 If all the hype about the Information Superhighway makes you want to take the next exit off it, you may be one of a growing subpopulation of people who are cyberphobic.” – Los Angeles Times

This was the introduction of an article in the LA Times in February 1996. Back then, journalist Carol Smith had a prophetic view on the future and felt pretty good what was going to happen in a few years. And now we’ve come to a point where – so called – “techno stress” is becoming a real problem in our society. So many people have become over stressed, simply because the amount of mental stimuli they’re faced with is too much. It goes on and on and it’s not only work related. We also do it ourselves in socializing, recreation and many other things in private life. About 50% of the people feel themselves “haunted” and bothered by too many things around them that draw their attention.

The importance of relaxation

Really relaxing and taking time for “dolce far niente” (“lovely doing absolutely nothing”) appears to be very important, according medical specialists. It helps recovering your body and mind, reduces sleeping problems and avoids smart phone addiction. That last issue sounds a bit odd, but it appears that tired and over – stressed people don’t have the energy anymore to e.g. work in the garden, visit a theatre, go to a gym or to make a (very relaxing) walk in the forest. And keep hanging on the sofa with the evil device in their hands. Bad habit, to be honest…and in fact a vicious circle of itself strengthening problems.

Some companies realize that 24/7 being reachable isn’t healthy for their employees and have made rules when to contact colleagues by phone, E-mail or WhatsApp. Or better said when absolutely not to do so. Now that’s a modern step forwards! It appears from statistics that one of each seven employees are faced with so many work pressure that they finally end up “burn out”. Recently the news reported that more people are unable to work due to mental problems than physical body problems. And that those with these mental problems are for 85 % younger people under the age of 35. This is alarming! A huge part of the younger generation, where the future depends on, is some kind of “destroying” themselves without really realizing that. A neurological professor of a Dutch university mentioned the effect of social media, SMS, Whatsapp and other digital internet and communication related activities as an important cause of these problems.

Life has become “too fast” with all the impressions around us. And many people are also themselves constantly activating their brain. Even during breakfast, lunch, dinner or the coffee break they can’t leave their smart phone alone. It simply never stops and that implies that they don’t relax anymore, become restless and finally over tensioned, in some cases resulting in “burn out”.

So what can we do against that? First and most important thing is self reflection and staying in control of our life. We feel obligated to do a lot of things, join whatever activity or party and so on… But do you really have to? Be self critical and assertive and take the freedom to say “NO”. With that you create time for mental sobering and silencing. And then suddenly, when you’re out of the “rush”, you find some time to think about what you really want in life. Valuable time to make plans, to carry out structural changes and to make well informed strategic choices. Time to “charge the battery”. Time for yourself…

The role of social media

Besides addictive smart phones, tablets and other handy technical equipment, social media also plays an important role in making people feel stressed because we interact with it dozens of times a day. Think about it what should happen if you didn’t pay attention to Facebook, Twitter, Instagram, Linkedin or the array of other social networks, and didn’t feed your curiosity any longer. Well… it may not be as exciting, but the (real) world simply goes on.

Once again: Being selective in what you do (and don’t do) is a wise decision to protect yourself in the “fast world” we live in nowadays. I’m already doing so, not saying that I possess all the wisdom of the world though. But I’ve experimented and made my own choices about my involvement in social media. Here’s my personal experience and recipe for a low-stress social media experience.

>> Facebook: I tried FB out a few years ago for about a month, was confronted with a clickjacking attempt and deleted my account. Not interesting, a lot of “noise” and also a scarifying infringement of privacy. And to be honest, I’m not missing it. Life is also bearable without all the Facebook ballast.

>> Linkedin: I’m there for business reasons and sometimes – when needed – I update my profile, but that’s about it. I don’t join discussion groups. It helps when you want to introduce yourself to a new foreign business relation. A kind of C.V. on the internet.

>> Pinterest: About the same approach. If I find some real nice pictures, I drop them on one of my boards, just for the fun. But it can happen that I’m not using this service for months.

>> Twitter: No thanks! Absolutely not. Who is waiting for my opinion? If I wanted to get nervous, I would start tweeting and become a slave of my smart phone, tablet or PC, because I need to follow all reactions to my tweets. This exemption alone has saved me from a lot of stress.

This behavior is addictive and Twitter also has a bad reputation when it comes to security of the medium. Hackers seem to frequently gain access to accounts and can post using your name. Famous people are sometimes faced with that in a rude way and see their reputation demolished.

Finally, I recommend trying an experiment: take a good chair, lean back and allow no one to disturb you. Make up your mind about what you really want and act accordingly. It isn’t easy in these modern times with so many technological distractions, but stay on the steering wheel yourself and become member of the “anti rush movement”.

Written by: Peter in The Netherlands

Technostress: How Technology Affects Us