The Dangerous Ties Between Cryptocurrency & Malware 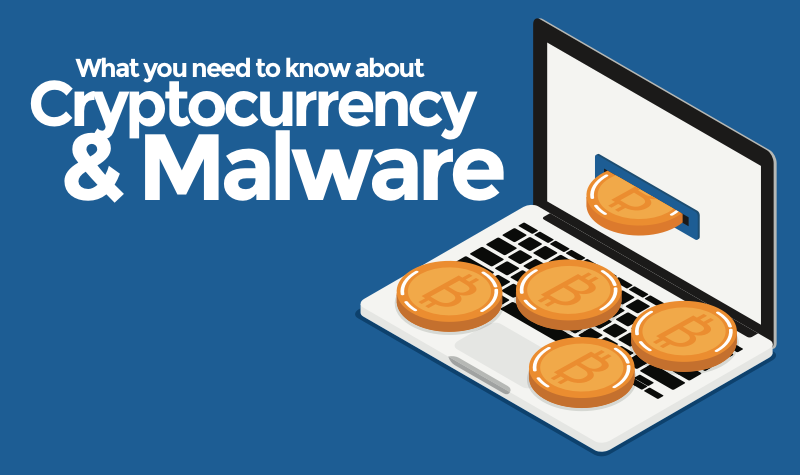 Just installed the latest free antivirus software, familiarized yourself with the basics of malware, and patted yourself on your back for navigating your way around top online scams? Well, sorry to burst your bubble, but you’re still not safe and nor is your computer. In fact, malware that hijacks your computer to mine cryptocurrency is swarming across the net!

A cryptocurrency is a virtual or digital currency that uses cryptography (a way of storing and conveying data in a certain form so that only those for whom it’s intended can read and process it) for security. A cryptocurrency is tough to forge because of this security feature. Perhaps the top drawcard of cryptocurrency is that by nature it’s not issued by any central authority rendering it immune to government intervention or manipulation.

However, there’s a “but” — more and more sites are transforming the PCS of innocent visitors into cryptocurrency miners. These tools don’t just slow a computer’s central processing unit (CPU) down to a snail’s space, but violate the privacy of users.

Two recent examples of cryptocurrency mining malware hit visitors to The Pirate Bay and Showtime sites. In The Pirate Bay case — a BitTorrent search engine/piracy site — users noticed a hike in their CPU usage and the problem wasn’t connected to the illegal downloading on the site. Next, users of the legal online streaming service Showtime also saw an increase in CPU usage.

Visitors soon realized they’d unwittingly activated malware that turned their computers into satellite cryptocurrency miners. These are just two examples of what is a burgeoning trend amongst websites: rather than relying on ad placements — the most common revenue source for non-subscription-based websites — they are resorting to cryptocurrency mining. A company called Coinhive has even released a special mining tool for website owners to embed in their sites to earn money without displaying ads.

Unfortunately, Coinhive has also become trendy with malware developers who have implanted it in Chrome extensions, hacked sites, and more. These tools mine less-popular cryptos with features that make their transactions undetectable by the powers that be.

This malware might threaten the cryptocurrency community and Blockchain — the company that revolutionized the financial services industry by empowering millions to directly authenticate and transact without pricey intermediaries. Blockchain uses cryptocurrency mining tech to reward hosts for keeping tabs on the transactions in their respective networks. Blockchain’s security is that no individual handles all transaction records, rather they’re spread across several CPUs of miners. Legit miners use their own PCs, but those abusing crypto-mining malware exploit and compromise other peoples’ computers.

While cryptocurrency may seem an attractive income source for website owners, infecting unsuspecting users with cryptocurrency mining malware violates their safety and privacy. Luckily, a standard ad blocker is still enough to prevent the insertion of these mining tools. However, if site owners informed users upfront that such a tool exists when they visit a website, perhaps this could become a legitimate source of revenue!

The Dangerous Ties Between Cryptocurrency & Malware