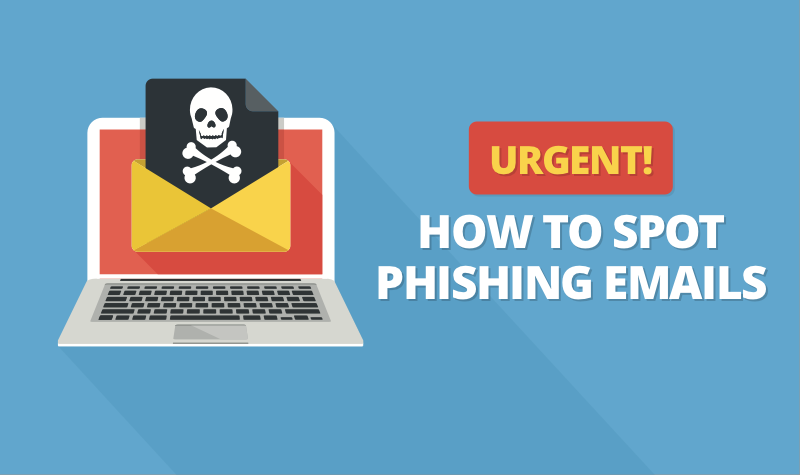 If you’re wondering why phishing is still a thing, it’s because you and your friends keep falling for it. So stop it. Stop it now.

Email is the largest platform for executing phishing scams, and criminals are getting better at using it effectively. Step 1 for not falling for the next phishing email you receive is understanding what phishing is, how it works and how to recognize it when you see it.

First things first, here’s why you need to know how to spot phishing emails:

What do phishing attacks actually take?

Phishing attacks can lead to a world of problems for you, including identity theft, data theft, fraudulent web usage, and downloading malware to your device. One wrong decision can turn your day into a long visit to your IT technician or even the authorities to clear your identity after it’s stolen.

Phishing attacks have been around for decades. They’re not going anywhere, and will likely continue to plague the internet due to the weakest link: you. Phishing emails flood our inboxes in a variety of flavors: from special offers to messages from your “bank”. Most of these are filtered by our email spam folders, but not all of them.

By design, phishing emails are well-hidden attempts at gaining your credit card and financial information. Phishing tactics are constantly becoming more sophisticated and creative at getting us to give away our information. It’s also much easier than traditional hacking because you only have to fool a person, instead of a machine.

How to go phishing

Make a convincing copy of the last email you received from your bank, and change the text to a message about a problem with your account, and add hyperlinks to the “bank website”. However, instead of the real bank website, they lead to your website which looks exactly like the bank website. The users who fall for the scam will literally be giving their login credentials away to you when they try to log in. Sending this to thousands of people will net you several accounts – depending on how convincing you are at spoofing a bank.

Here’s an example of a url preview. All you need to do is hover your cursor over the hyperlink.

Who are the targets?

How effective are phishing attacks?

While most phishing attempts are filtered to junk and spam folders, some are still effective at getting by these filters and in front of your eyes. Last year, Google reported one effective site had a 45% success rate of people turning over their information while the least successful site had a 3% information turnover rate. Information collected from phishing attempts can cause grave harm to an individual or organization. The Google report also stated within one hour of being phished, 20% of information collected can compromise accounts and websites. Takeaway: if you get phished, act quickly to stop the damage! Change your password, report the sender, and then report the site.

Why do phishing attacks still work?

How can you recognize phishing emails?

As previously mentioned, phishing attacks have become more sophisticated and can be difficult to spot if you aren’t vigilant. A phishing email will often urge you to take immediate action. For example, you may receive an email from PayPal or your bank stating your account has been compromised and you must login to take immediate action. The email will continue with a message that not taking action will result in the closure of your accounts. In a panic, you click on the link in the email and enter your login information. At that point, you have given your login credentials to someone else, and you are now a victim of a phishing attack.

You can also identify a phishing email because it came from a sender you do not recognize. If you do not recognize who is sending the email, don’t open it and delete it immediately. Another indicator of a phishing attempt is the URL in a hyperlink in the email may not match the displayed link. You can hover your mouse over a hyperlink without clicking on it to see a small pop-up with the URL address you will be taken to if you click on it. If the links do not match, do not click on it. If you click anyway, check the URL. Does it match your bank’s? If not, it’s a phishing site, which you should rate and report immediately.

How can you avoid becoming the next victim to a phishing email?

You can protect yourself from phishing attacks by tightening down your spam filters and being more cautious. “The Devil’s in the details”, so pay closer attention to the details in the email. Hover your mouse over any URL the email is urging you to click on. When in doubt, go to the website (Paypal, your bank) directly to login and review your account – don’t click on the links in the email. You can also send a spam report to many institutions warning them of the phishing attempt. This can raise awareness and help you and others from becoming victims. You should also change your password frequently on your email accounts as a good security practice because once a phishing attempt successfully makes it to your inbox, the attackers may continue to send future attempts and may attempt to crack your password knowing they are sending emails to a legitimate address.

Bear in mind that most of the time, it’s nearly impossible to catch the perpetrators of phishing attacks, so you are your own last line of defense. Take this seriously, educate yourself and your friends so you can protect your information.